“A lot of them feel confident that they can use this flip chart to teach children and that they can pass on to other people as well.”
— Sophorn Phuong, Love146 Project Coordinator 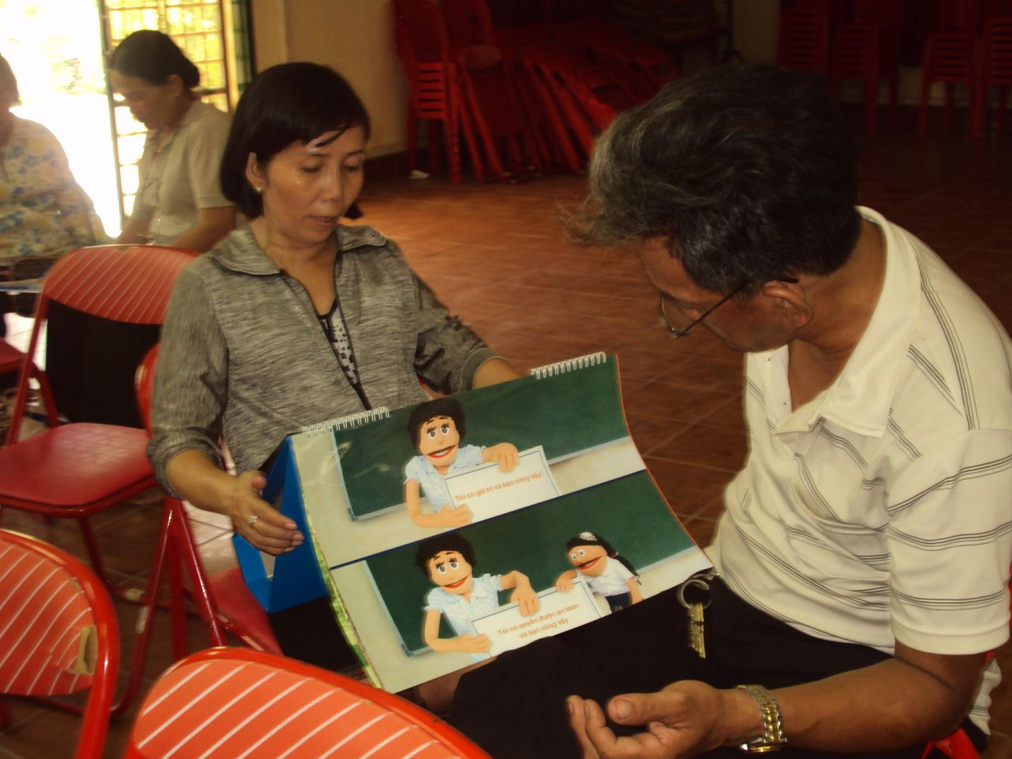 At Love146, we believe that grassroots movements are the most effective in sustaining long-term change. We can certainly work to ignite and kickstart these movements, but if the vision isn’t present on a grassroots level, we’ve found that the mission has a hard time succeeding.

Since 2011, we’ve been training adults on how to use a flip chart we helped to create. The flip chart helps adults explain human trafficking in a creative way that children can understand.

This flip chart — called the “Good Touch Bad Touch” flip chart — tells the story of a man named Mr. Cool who uses money, gifts and affection to manipulate children into a life of sexual exploitation. At the end of the story, children are given the opportunity to say if they know any men or women who act like Mr. Cool.

When this program began, Love146 Asia Capacity Building Director Dr. Glenn Miles and Fiona Smith, an adult education teacher and practitioner from the UK, trained adults to use this flip chart. Glenn’s assistant, Sophorn Phuong, a Cambodian man who has worked with Love146 for the past three years, came along as a translator.

But in the last year, Sophorn, who is now Love146’s Project Coordinator, has been a lead trainer on this flip chart — traveling to communities of professionals caring for children and empowering them with this useful tool. Sophorn has provided the flip chart training this month to 36 Vietnamese adults, empowering them to reach out to their local community in Cambodia with the flip chart tool. He is going to provide another training for the Cambodian population later this year.

Sophorn says he hopes that a wider community of professionals gets equipped to implement this material:

“They said that the training was really important and necessary to help children to understand about sexual abuse so that they can learn to keep themselves safe. In terms of issues with boys and men, it is still a new concept for them because a lot of them have never thought that sexual abuse could happen to boys and men too, but after the training they have learned that boys and men can be victims of abuse too, and that we need to care about them and listen to them. A lot of them feel that they are confident that they can use this flip chart to teach children and that they can pass on to other people as well. They like the flip chart because it is easy to use and easy to understand.”

Consider monthly partnership and help Sophorn reach out to grassroots caregivers in the country he grew up in with a tool that has protected thousands of children all over Southeast Asia.